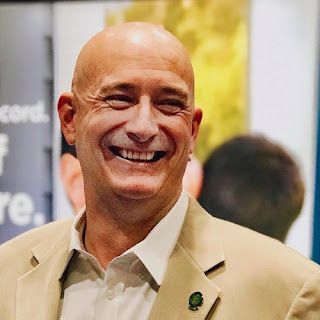 Today’s guest is Mark Mellott, a senior director with the Cerner Corporation. Prior to joining Cerner in 2017, Mark served in the Army first as a combat medic, and later as a Medical Service Corps officer specializing in health information systems management. He describes the field of health information systems management as the confluence of people, problems, and technology, and it was helping people solve problems through the appropriate and efficient use of technology that drew him to the field. In particular, some fifteen years ago Mark began thinking about the problem of electronic health records in combat zones and how to ensure the information about injured soldiers was being captured and preserved. Mark had observed this problem during his deployments to Kosovo and Iraq. This passion led him to earn a PhD in policy and to deploy to Afghanistan to test his theories. After retiring from the Army, he followed his passion for improving medical records to the Cerner Corporation where he is part of the team working to deploy an integrated electronic medical record to both the Department of Defense and Veterans Administration. (As an aside, I enjoyed doing this interview because Mark has been one of my closest friends for more than 10 years, so my interviewing style is a little less formal and we laugh a bit more than usual.)

Time       Topic
0:01:50 triple major in liberal arts
0:03:37 dropping out to enlist as an Army medic
0:07:18 transitioning back to college; becoming a flight medic in the reserves
0:09:14 becoming a Medical Service Corps officer
0:10:27 early career - discovering health IT
0:14:20 IT problems are management problems
0:15:33 becoming an official Medical Service Health Information System Management Officer (70D)
0:18:15 Mark turns the tables on me for a minute
0:19:45 going to a medical brigade; deploying to Kosovo
0:20:44 describing a combat support hospital
0:23:05 learning to lead soldiers, first command in Iraq
0:25:37 turning point - deciding to make the Army a career
0:27:06 helping people work through hard sets of problems
0:28:34 career progression - continued focus on being a leader
0:32:18 developing a career against the grain - staying with field units
0:34:23 PhD in Policy from Clemson
0:43:23 trying to solve the problem of battlefield medical documentation
0:46:03 teaching at Army-Baylor, waiting to go back to the field
0:47:10 deploying to Afghanistan, testing economic theories
0:50:09 Army Medical Department Headquarters - quantified self
0:53:02 deciding to retire, reflecting on a career of service
0:57:14 preparations to transition to civilian life
1:04:35 Cerner and the DOD/VA EHR transition
1:08:40 what's the big deal about EHRs?
1:10:15 machine learning, AI, and EHRs
1:11:32 learning to work in corporate America
1:13:54 what's most exciting in the health IT space
1:15:50 leadership philosophy
1:17:01 what leadership competencies does he look for
1:18:22 what makes a good mentor
1:21:13 guidance on professional reading - something bigger than you
1:23:58 why should early careerists choose health IT?